I made Bon Appetit’s Best Buttermilk Biscuits last week, and they were pretty dang good. A little tang from the buttermilk, plenty of layers, crisp tops and soft centers ready to fill with a pat of butter or a spoonful of jam.

I made a few changes to BA’s recipe. For one, I kneaded my biscuits together fully by hand, instead of using a pastry cutter, or the food processor BA suggested. You’ll find directions below for hand-kneaded biscuits, a slight adjustment from BA’s version. I did look back at BA’s video after setting my biscuits in the oven, and felt like I over-kneaded my dough. If you make these, by hand or in the food processor, be sure to leave decent-sized butter chunks in your dough, and allow the dough to stay crumbly.

I also cut back the butter a tiiiiiiny bit, removing 2 tbsp from the dough, and skipping the butter-brushed tops altogether. Some might call this heresy, but I felt there was a ridiculous amount of butter in the BA recipe and wanted to dial it back, if only a bit. I’ve written up the recipe with the full amount of butter, so you can decide for yourself how much to include.

END_OF_DOCUMENT_TOKEN_TO_BE_REPLACED

Here’s a simple plum jam with just three ingredients– four, if you decide to add a dash of vanilla. I love recipes like this. Simple, classic, and incredibly delicious. The plums are naturally high in pectin, and using an appropriate amount of sugar lets them gel.

END_OF_DOCUMENT_TOKEN_TO_BE_REPLACED

Food-wise, Latvia has many things in common with its neighbors, Estonia and Lithuania. Potatoes, wheat, barley, and rye are staples. Meat is the centerpiece of many meals. Latvia is a huge producer of dairy products, and you can see this in the cuisine. Sauerkraut is a favorite, each family preparing sautéed sauerkraut its own way. Cranberries and other wild berries are turned into deserts. Foraging is a common way to gather food, and foraged mushrooms are pickled or prepared as a sauce, as they are here. 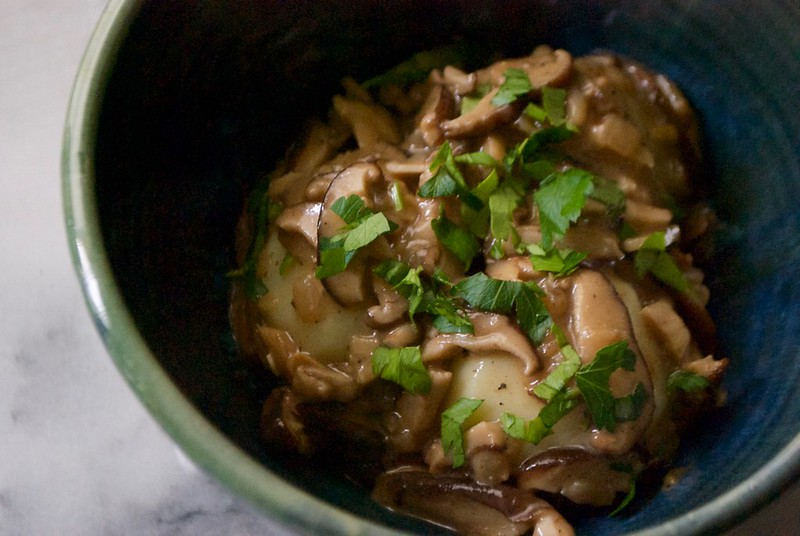 I wanted cook a traditional Latvian food for this project. This mushroom sauce is very simple, but it’s also a celebration of Latvia’s foraged mushrooms. If I were making the most authentic, Latvian version of it, I might make it with boletus mushrooms, which are abundant in Latvian forests and one of the most popular varieties for cooking. I didn’t have access to any boletus mushrooms, so I used locally grown shiitake mushrooms from my CSA share. You can use your favorite locally grown or foraged mushrooms in this sauce. 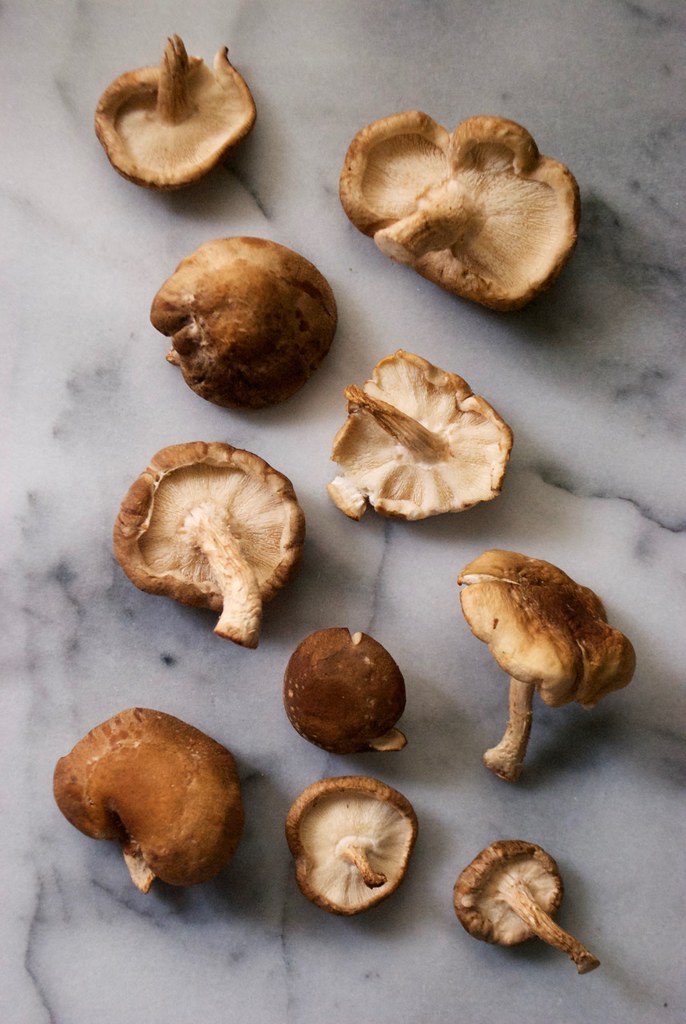 I first came across this sauce in this 1984 archived New York Times article on Latvian cuisine. I also saw it mentioned as a favorite in this blog post about foraging in the Gaujas National Forest, and this blog post on common varieties of Latvian mushrooms. Some versions of the sauce include bacon or ham, and others don’t. I have chosen a bacon-free version to suit my own preferences.

I served the sauce spooned over peeled and boiled potatoes, topped with parsley, for a hearty lunch.

END_OF_DOCUMENT_TOKEN_TO_BE_REPLACED

Lemon meltaways are a tender cookie made from a shortbread base. They’re coated in powdered sugar, crumble easily, and are designed, as the name suggests, to melt in your mouth. Lemon meltaways can be sweet or tart– this version stays on the sweet side, getting its lemon flavor from zest, and just a teaspoonful of juice. 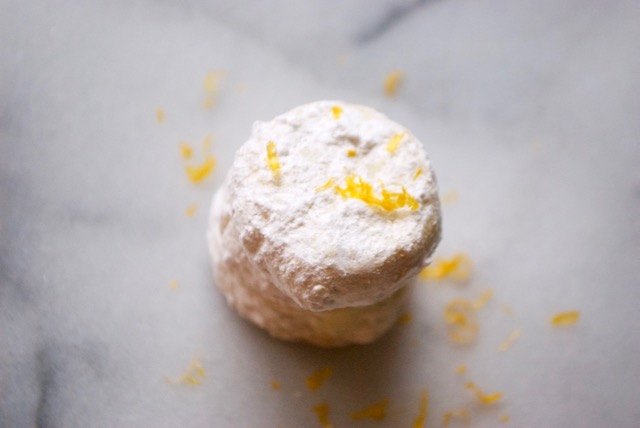 I based my recipe on this one from Stella Parks of Serious Eats. The Serious Eats version calls for tapioca starch instead of corn starch, for a more delicate, meltier cookie. I used corn starch, which is more of a pantry staple for me than tapioca. The cookies still tasted great to me, and I didn’t notice any missing melty qualities. However, if you do have tapioca starch on hand, I’d go with the Serious Eats recipe for something more tender. 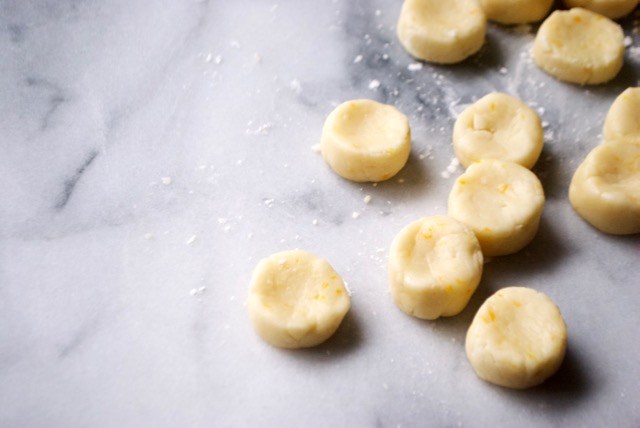 END_OF_DOCUMENT_TOKEN_TO_BE_REPLACED

Shortbread cookies are a favorite of mine because they are so simple to make. Classic shortbread recipes contain only three ingredients– butter, sugar, and flour.

Of course, the variations are endless. You can swap the white sugar out for powdered sugar, for a finer crumb. This seems to be the standard in most modern shortbread recipes, and this is the version you’ll find in this blog post. Some recipes will use lower-gluten cake flour, or swap a little bit of flour for cornstarch or tapioca starch, which results in a crumblier, melt-in-your-mouth texture. Flavorings include vanilla extract, almond extract, lemon or orange zest, chopped nuts and even dried lavender flowers. 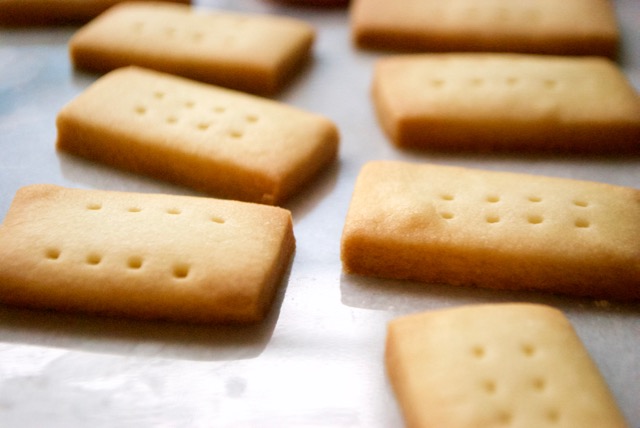 Shortbreads tend to be a holiday cookie in the US, but they also pair well with an afternoon cup of tea or coffee.

END_OF_DOCUMENT_TOKEN_TO_BE_REPLACED

This is the very first recipe in my 193 Recipes Project.

Why did I start with Estonia? I figured I would begin with one of the Baltic states because I don’t know too much about the food in this region. This challenge is about eating new foods and learning about far away places. I certainly didn’t know what Estonians ate before I started to research.

My local library didn’t have much information on Estonian cuisine, but I found the information I was looking for on Wikipedia, Estonia’s Ministry of Rural Affairs website, and several Estonian food blogs. There’s a lot of meat and fish in the national cuisine—  I saw many recipes that called for ground beef, pork, or fresh fish. There were a number of baked pastries and soups, as well as pickled vegetables and fermented foods. What I didn’t expect is how seasonal and fresh Estonian food is. There are many plant-based dishes, featuring fresh carrots, potatoes, peas, foraged berries, apples, and many varieties of local wild mushrooms.

For my recipe, I chose to make porgandipirukas, a savory carrot pie. 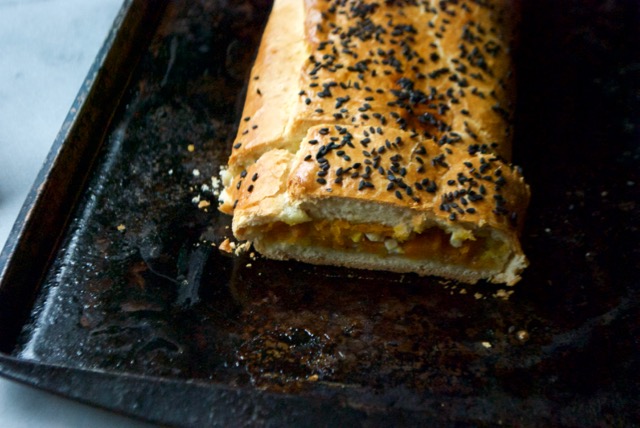 There are many variations on this pie, but the filling base is always boiled or sautéed carrots and onions, seasoned with salt and pepper. Sometimes a chopped boiled egg, cheese, smoked meat, fish, or chives are added to the filling. The pastry is Danish dough. Home cooks use frozen Danish dough, or make a quick yeasted enriched dough with butter and cheese. The pies are most often shaped into a long rectangle, and sliced thinly to serve— that’s what you’ll see in this post. Some cooks also make hand-pie versions, and others make open-top pies.

The version of porgandipirukas I made is filled with grated carrot, minced onion, and a  chopped boiled egg, and wrapped in a buttery yeasted dough. The filling is sweet from the carrots, savory from the bit of onion, and almost meaty from the egg. The pastry is made in two parts— first milk, yeast, and flour are whisked together to form a wet dough, then a crumbly, buttery mix is kneaded in. It’s a simple yeasted enriched dough, but the two-part process also makes it pleasantly flaky and light. (There’s also an easier shortcut variation in the recipe notes.)

END_OF_DOCUMENT_TOKEN_TO_BE_REPLACED

Yesterday, I wrote about my personal challenge to cook a dish from every country around the world. Today, I’m writing out my guidelines for this challenge. Not because I need a formal set of rules— this is a just-for-fun side project— but because I think typing out some rough guidelines before a big project like this will give me some basic structure and sanity.
Here are my guidelines.

END_OF_DOCUMENT_TOKEN_TO_BE_REPLACED

Cook one dish from each country around the world.
This is my personal challenge. What better way to get to know the variety of cultures and cuisines on our planet than by cooking a dish from each country?
There are no timelines, and no target dates. This is a challenge, but it’s also meant to be fun. “Every country” is a fuzzy concept, and somewhat controversial, but I decided to use the United Nation member states list as my benchmark. I’ll update the count + link the recipes below as I work my way through this list. Here are my guidelines for the challenge.
Current status: 2/193

END_OF_DOCUMENT_TOKEN_TO_BE_REPLACED

Above, a photo that I snapped of the inside cover of Victuals the day it arrived at my doorstep– I wanted to share the beauty of this book the minute I saw it.

Ronnie Lundy’s Victuals (pronounced “Vittles”) is a chronicle of a 4000+ mile journey through Appalachia, a story and a history told through food. It’s part cookbook, part edible atlas. It winds its way through Tennessee, Virginia, Kentucky, and North Carolina, and pays homage to the traditions of Europe, West Africa, and the pre-colonial Americas that come together in the food of the Mountain South.  It’s a book filled with seasonal and regional recipes, but also a history of the land and the people of Appalachia. Victuals reflects a confluence of climate, culture, industry, and ethnic heritage.

Personal history also plays a huge part in this book. Ronnie Lundy grew up in Appalachia. She vividly remembers her “summers up home” in Kentucky, and recipes like the swing shift steak come directly from her childhood.

There are recipes for every season. There are recipes for bright vegetable sides and hearty meat-centric suppers. There are recipes for sweet desserts and salty snacks alike. There’s a roasted root vegetable salad that comes dressed with bacon and orange soghum vinegar. Kale potato cakes, spring ramp pot roast, miner’s goulash, and a speckled butter bean cassoulet with rabbit confit. A simple skillet cornbread, a luscious buttermilk brown sugar pie, salty cheese nabs, and the sweet-and-savory banana pudding you’ll find below. There were also a few odd but delicious-sounding pickle recipes I put on my list for the spring– picked ramps and pickled green strawberries.

The book is divided by key food groups and ingredients. Each section is devoted to a staple food– salt, corn, beans and apples, among others. The apple section is one of my favorites. It includes fried apples, cake, a sticky pudding, and a recipe for pork & kraut in cider gravy.

To be honest, I had no idea the food of Appalachia was so varied. Staple foods pop up repeatedly, but there’s almost infinite variation in the preparation and addition of seasonal produce. And while this book digs deep into food traditions, the recipes are modern and fresh.

END_OF_DOCUMENT_TOKEN_TO_BE_REPLACED

Is summer over already? It’s the first day of September and the last few weeks have flown by. I find it hard to believe— as I do at the start of every season— that it’s already time for the weather to change. Soon we’ll be trading in bathing suits for coats and sweaters, ice cream for hot cocoa. 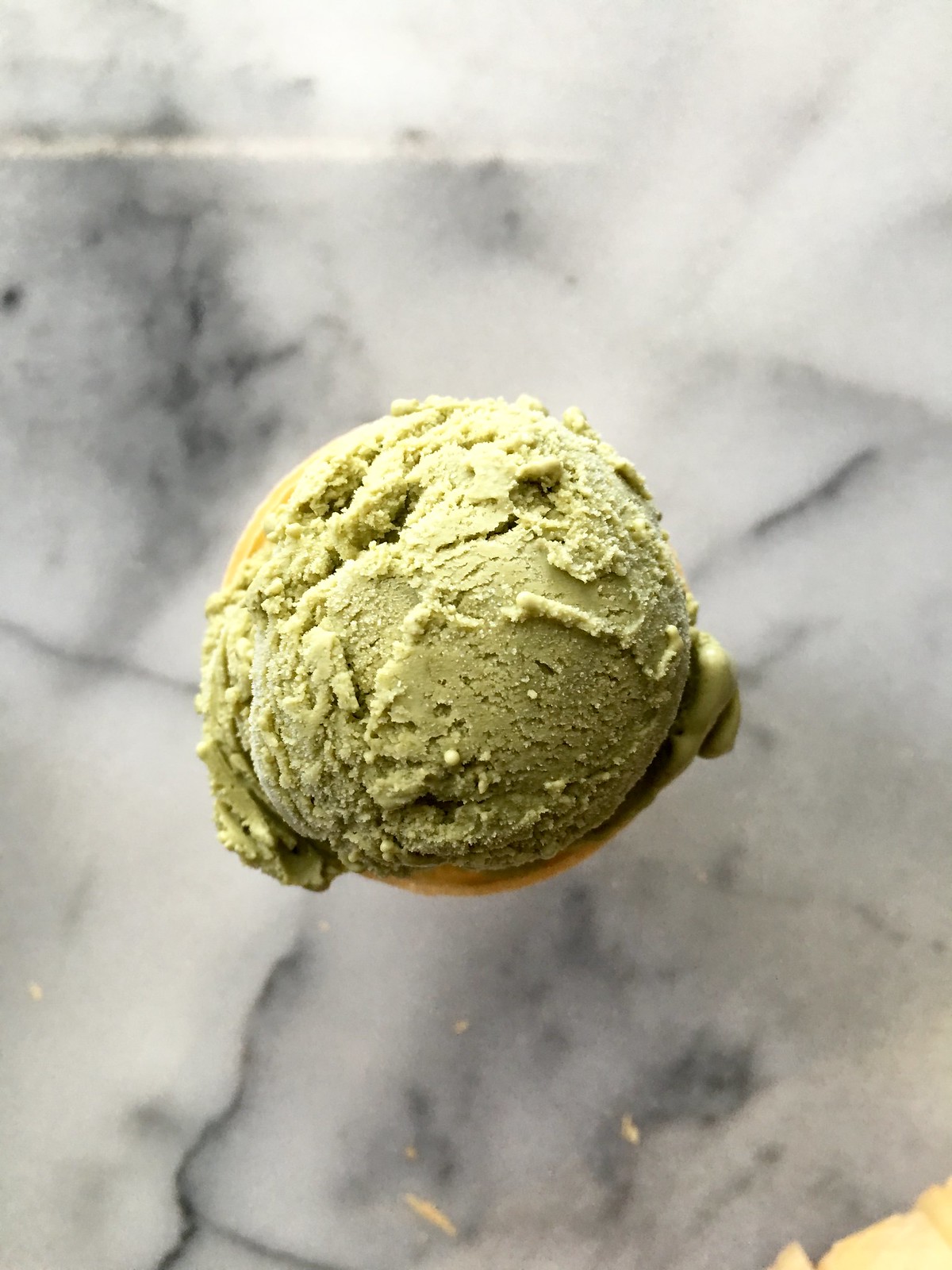 But let’s not think about that just yet. September is actually the warmest month of the year in the Bay Area. The highs are in the high 70s and we’re just settling in for a long Indian summer. Today we’re making another ice cream recipe to get us through the last sweaty days of the season. 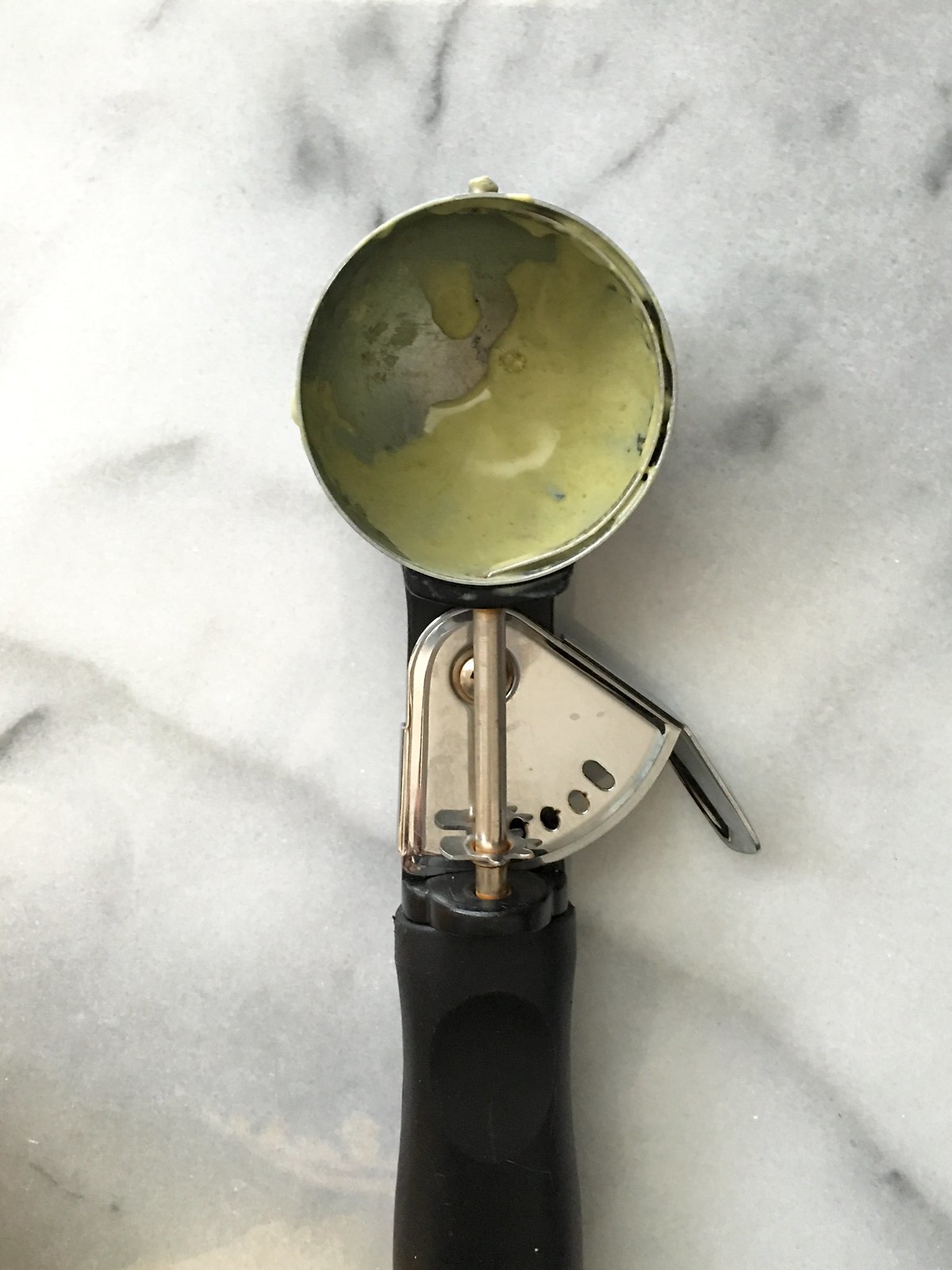 This matcha ice cream is cold, creamy, and sweet.

END_OF_DOCUMENT_TOKEN_TO_BE_REPLACED

Kitchen In The Hills
Blog at WordPress.com.
Loading Comments...